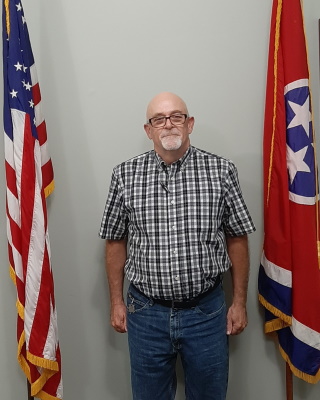 My name is Bruce Wentworth. Late July 2020, I started working as Veteran Service Officer for Smith County. Previously, I retired in 2018 from Schneider Electric after 29 years. I have one daughter, two sons, seven grandchildren and six grand dogs. I moved to Tennessee in 1988 and settled in Elmwood in July of 2015. I have been a member of the American Legion for 27 years, of which the three past years have been with Post 57 Carthage TN. My military service: active duty USN from 1976 to 1986, Tennessee Army National Guard from 1990 to 1992, and USNR from 1992 to retirement November 2000. I am honored and humbled to assist and serve the veterans of Smith County.

The Smith County Veterans Office is here to serve all Smith County Veterans in dealing with the VA. If you are a Veteran from anywhere, I will help you too. I assist with any Compensation or Pension questions that you may have. If you want/need to file a claim with the VA, I can do that for you too. I am certified through the VA and am re-certified each year. Please REMEMBER this: I WORK for YOU the VETERAN!! I DO NOT WORK FOR THE VA!!

What do I need to start a claim?

You MUST have a copy of your DD-214 to start anything with the VA.

The VA filed a claim for me and I was rejected, what do I do now?

They may have filed it wrong or did not have enough evidence to support your claim; I will try to find another way we can present your claim to the VA in a way it will be accepted.

What is my wife entitled to?

IF you are getting Compensation or Pension, and you pass away; she MAY receive a percentage of your monthly check, depending upon her monthly income.

Can I be buried in a State Cemetery?

Yes; there is a wait time for internment and the cost has been cut to $200.  Markers are at no charge to the family.